There’s something so enduring about the characters of Winnie the Pooh that even the most simplistic of their stories have a certain intelligent charm to tales of talking stuffed animals. Disney’s Christopher Robin is a perfect example of how they can save a film too safe, sappy, and overbearing with its message about growing up without losing your sense of play. There’s thankfully no darkness in its depiction, despite the dreary streets of London and the more muted tones of Hundred Acre Wood. At its core, it’s same old Pooh antics that have made this fluffy collective the most wholesome, smart and funny of the Disney ensembles. 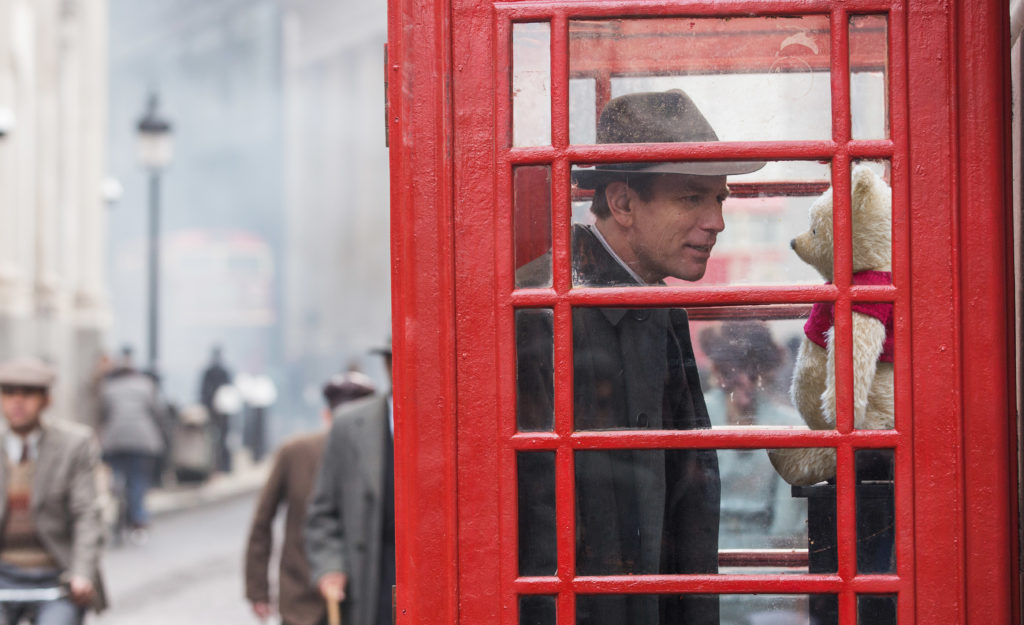 The film centers on a question that always lingered in Christopher Robin’s conversations with Pooh but never adequately addressed: What will happen when Christopher grows up? Not surprisingly, he leaves behind the woods for boarding school, the war, a job, and to raise a family. But he’s not the same Christopher (Ewan McGregor), more of a worrying worker that puts business ahead of family. He arrives home and can’t even smile at his wife. His daughter wants him to read her a bedtime story, and he selects text on the industrial revolution. He’s lost his playful ways that once helped his animal friends.

Into his world comes Pooh, the silly old bear willing to venture out of his fantastical woods and into the stuffy world of post-war England. This could be a dangerous development, as we’ve seen from previous experiences of fantasy cartoon characters coming to life in fish-out-of-water tales, the sourest being The Smurfs that should’ve stayed in their land of mushrooms and magic. Thankfully, the familiar characters, despite looking a little odd as more realistic computer-generated depictions, haven’t lost their touch. Pooh is still a dopey questioner of the world, Piglet is still a fearful creature, Rabbit is still a worrying wart, Owl is always a wise sage, Eeyore is still a sad sack, and Roo still a cute little kangaroo. Oh, and of course Tigger still bounces. Why wouldn’t he? It’s a wonderful thing, bouncing.

It helps that the story is simplified to keep Pooh’s adventure free of convolution and modern world set pieces, despite some silly accidents of Pooh breaking Christopher’s house and Tigger causing a ruckus in traffic for little reason with forced hilarity. After much denial from Christopher and rushing of Pooh back to his home before more Englishmen are freaked out by a talking teddy bear, the film finally starts to take off with its whimsy. Watching Ewan McGregor get back into the swing of things and embrace Pooh’s impeccable logic of play and doing nothing brings back the familiar and powerful charm the characters were known for.

It’s just unfortunate that the characters find themselves trapped in a live-action film with morals so painfully spelled with overblown scenes of sentimentality that themes of favoring family and imagination feel artificial. Once more, Pooh and company come to the rescue with their well-defined comedy, whereas the human characters spell everything out within big, bold letters that are sure to give a concussion of good intentions. While I fully expected Christopher Robin to realize that life is more than business meetings and studying, I wasn’t ready for him to point these lessons out like the review of an after-school special, making sure the message is loud and clear.

Christopher Robin has the tricky balance of fantasy and reality where honey-seeking and Heffalump-hunting trump a standard plot of Christopher trying to save a business and his family. It seems like the type of film Disney would have made in the late-1990s and thankfully not the mid-2000s of trying to fathom how Pooh would handle driving a car or eating honey out of the head of a plastic bear container. Whenever the characters are on screen getting into their usual squabbles and discoveries laced with witty commentary on life, I smirked and even laughed, perhaps harder as I wanted to push the predictable plot aside, which must insert scenes of Christopher at war and telling off his bosses in an almost cartoonish manner.

Much like Christopher Robin’s arc, I wish the film would learn its lesson about embracing woodland adventures sooner than its brief dip into a more somber story, teetering on the edge of becoming as awkward as Hook. The film, if nothing else, is a testament to how you can’t help but love Pooh. Well, until he’s forced into a movie where he uses an MP3 player and does a suggestive dance with a honey pot on his head. Let’s hope we never reach that point where I find myself looking at this franchise with a sigh and an “oh, bother.”

“The Meg” is Without Bite

Mission Impossible Mops Up Weekend of Teddy Bears and Spies