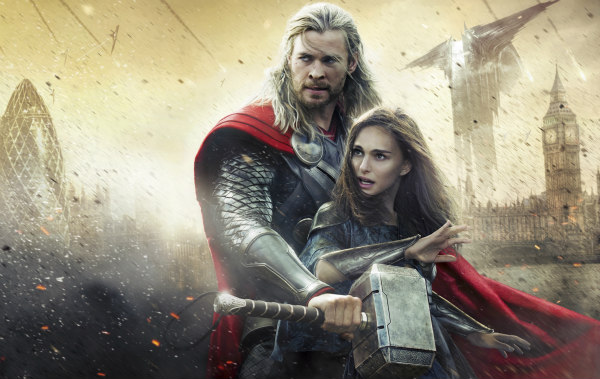 “The only thing that makes sense here is that nothing makes sense.”
So sayeth a rock monster to Thor on a planet of gladiator combat. And, yet, there is some sense to the technicolor wonder of Thor: Ragnarok in how it manages to soar with flying colors past its lesser predecessors. I always liked the character of Thor, thanks mostly in part to Chris Hemsworth’s charming personality and strength, but still felt as though his films were underutilized, offering mere glimpses of the full potential of the hero and his many worlds. Finally, there’s a film that not only explores the deeper depths of the nine realms but has fun with the material in a focused and surprising story that takes place almost entirely off Earth. 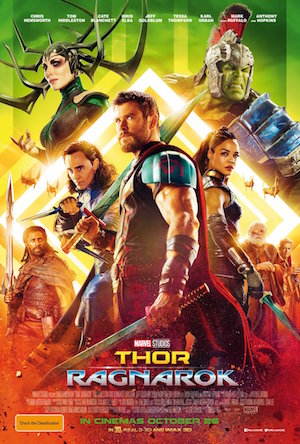 All is not well in the fantasy world of Asgard. Thor returns home to discover that Odin (Anthony Hopkins) has gone missing, replaced by Thor’s masquerading trickster of a brother, Loki (Tom Hiddleston). The siblings put their feud behind them, mostly, to find their father on Earth (or Midgard as it’s known around Asgard), warning them of a new threat on the horizon. The great evil threatening the kingdom this time is Hela (Cate Blanchett), a sinister sorceress with a family tie to Odin. Despite her ability to keep up with the quips, she’s your standard evil lady wizard, complete with a green motif and thorny helmet. Her hand-to-hand combat skills are not too shabby though, so she at least does a little more than outstretch her arms to zap her victims.

But there’s thankfully a better villain for the majority of the film. When Thor and Loki are knocked out of Asgard’s orbit, they find themselves on a high-tech junker planet that seems like the dumpster of the 1980s. All tech is rustic, all color is bold, all outfits garish, all faces painted and a 1980s style T-shirt is there for some reason. The planet is controlled by the Grand Master, played with incredible exuberance by Jeff Goldblum. Dressed like David Bowie’s weird uncle, the Grand Master’s favorite pastime, aside from being a DJ of 80s synth, is pitting galactic warriors against each other in arena battles for his entertainment.

The familiar ally of Hulk (Mark Ruffalo) is found on this planet, apparently more comfortable to speak with and understand since his mysterious disappearance in Avengers: Age of Ultron. This may be the first film depiction of the Hulk that portrays the character with more wit and charm than the standard “Hulk smash” utterances and massive displays of intimidation. Hemsworth and Ruffalo have some fantastic chemistry and appear as the perfect pair for an environment that requires brute force and technological smarts. They will have to fight each other at one point, but also find the right spaceship to fly through the correct wormhole, which just so happens to be named the devil’s anus.

Another ally found on the planet is Valkyrie (Tessa Thompson), the member of a lost military of Asgard that has turned her life over to bounty hunting. She has a personal vendetta against Hela, having lost her entire army to the sorceress’s powers, but she needs that extra confidence boost to put down the bottle and pick up a sword again. Outside of her backstory, Valkyrie is mostly your standard femme fatale warrior with an empowerment mantra and her obligatory scene to saunter into battle with blades drawn.

Unlike previous Thor films that felt all over the place, Ragnarok finds a pleasing balance between a story that never veers wildly off course, yet still takes a few chances here and there. Hela’s conquering of Asgard is nothing all that spectacular, but it holds firm thanks to the additions of the side-switching Skurge (Karl Urban) and the sanctuary guarding Heimdall (Idris Elba). There’s plenty of humor, including the most hilarious of callbacks to the first Avengers movie, but it comes more naturally and through the story, rather than stopping the plot to make an awkward jab or satirical reference.

Director Taika Waititi has given Thor a fantastic makeover. There’s a distinct and stylish 1980s vibe to the sci-fi weirdness, made possible by the colorful cinematography of Javier Aguirresarobe and the synth score of Mark Mothersbaugh. There’s exuberant weirdness to the realms that always felt absent from the more drab predecessors. These additions help elevate the film past its superhero requirements of an obligatory third-act fight that becomes confusingly assembled, despite taking place on a narrow bridge. There’s enough fun, giddiness, and invention to overlook how Thor’s grand power of thunder is never given much explanation for its rules. And I’d rather not get into the pointless debate about how Thor can control the weather. I’m more content to enjoy the film’s candy-coated craziness of a hammer-wielding god bashing alien spaceships and teaming up with the Hulk to stop an evil sorceress.

[author title=”About the Author” image=”http://popstermedia.com/wp-content/uploads/2015/07/mark_mcpherson-300×221-150×150.jpg”]Movie Reviewer Mark McPherson has been all about movies since working at a video store in his youth. His talents range from video editing to animation to web development, but movies have always been his passion to write about.[/author]