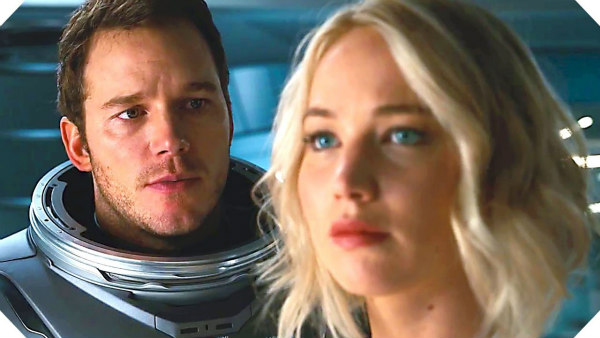 Chris Pratt awakens from hibernation on a spaceship transporting humans to a new world. He has awoken about ninety years too early and will not survive the trip, with no means of going back into hibernation or alerting the crew. He thankfully has the entire ship to himself with plenty of dining and entertainment to be had, but has no one to share it with.

What does he do with his limited life aboard a starship? He drinks, plays video games, watches movies, plays basketball and chats with a robot bartender (Michael Sheen). It’s fun for a year, but then he grows bored and aimless. And the plot that follows is just as boring as a mash between a lackluster romance and by-the-numbers action. After all, you can’t put Chris Pratt and Jennifer Lawrence in a big-budget sci-fi picture without having some sex or blowing something up. 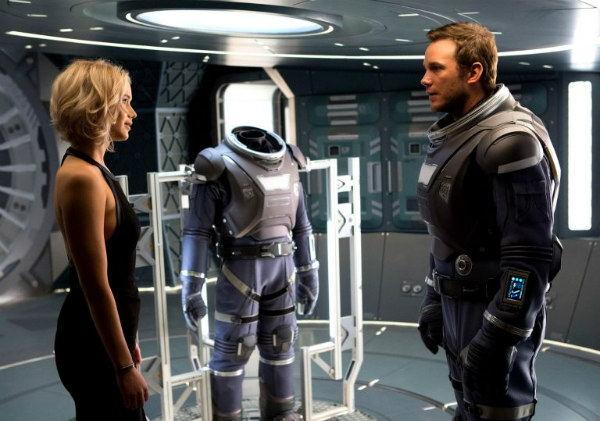 Pratt’s character of Jim is an engineer, but is restricted access to certain areas of the ship. The blips of power failure don’t weigh heavily on his mind, figuring that it’s either out of his control or a story element that needs to be reserved for the third act. For most of the movie, he’s hanging out on the ship trying relieve his loneliness and come to terms with the fact that he’ll die on a spaceship.

To alleviate this pain, he decides to awake and sacrifice the life of one of the other passengers to have a companion during his remaining days. He studies up on and selects writer Aurora (Jennifer Lawrence) to be his traveling buddy and hopeful girlfriend. I’m not sure why he’d choose a writer considering we don’t see too much him indulging in literature. Perhaps he has admired authors since he was a boy. Or maybe Aurora was just the hottest of the lot.

So now Jim has a female companion to share this immense ship with and has even lied about her pod malfunctioning to save as a future conflict. What do they do now? They drink, play video games, watch movies, play basketball and chat with the robot bartender some more. Does Aurora write a new book? Sure, but you’ll never know much about it as that arc is too boring. The movie is much more content showing Lawrence swimming in a pool or Pratt creating robots to give her love notes. Couldn’t Pratt use those engineering skills to rewire the robots to open engineering doors and find out what’s causing the power outages? Those are third act questions and the second act is reserved for Pratt and Lawrence becoming lovers.

But the chemistry between the two is about as artificial as the gravity on this ship. They don’t share too many interests in conversations and spend most of the movie either drinking with Arthur, eating out, indulging in the ship’s entertainment or having sex. Is that all there is? One would think they’d have more to talk about with their skills, their pasts, the world they left behind and the flawed company they put their faith in promising them a new world they’d never see. Apparently such words escape them when they both take in the majesty of going on a space walk.

The ship they occupy, Starship Avalon, is about as gorgeous as its leads and perhaps has more personality. The design of everything from the cafeteria to the concourse all have a large scale and a slightly eerie sterility, with its faceless robots and assuring computer voices. There are even some surprising special effects set pieces, as in a scene where Aurora swims in a pool when the gravity gives out and struggles to prevent herself from drowning in clashing blobs of water. Logic goes out the window, however, for how she gets to this scene.

What’s most insulting about the picture is that there is no urgency to the issue of the ship. Even when Jim and Aurora find their way into the ship’s engineering section that is in need of repair, they decide to take a break, get some exercise and rest. When they awake, the ship is mere hours away from destruction in a fury of action movie cliches. The two must vent the reactor, but, uh oh, the vent won’t open automatically. They’ll have to open it manually, but, uh oh, it needs to be opened from the outside. And so on and so on the movie desperately attempts to mount last minute tension, hoping to inject a little testosterone into this sappy sci-fi tale.

Passengers begins with grand ideas and dazzling special effects, only to end up as contrived and predictable as substandard science fiction. Pratt isn’t up to snuff as his usual snarky self and Lawrence is working without much in a role that mostly finds her gasping and shouting in agony. Any moral topic, such as Aurora’s bitter mistrust of Jim awakening her early, is quickly glazed over so that the two can stare lovingly at each other. It’s an insulting excuse for science fiction, proving that the biggest stars and the best special effects in the world can’t make up for a script that is lacking in ideas and morally adrift.

Movie Reviewer Mark McPherson has been all about movies since working at a video store in his youth. His talents range from video editing to animation to web development, but movies have always been his passion to write about.