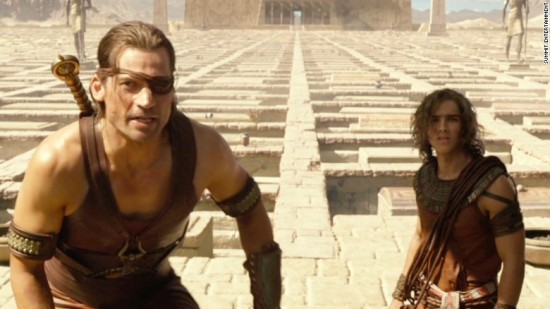 The makers of the forthcoming film “Gods of Egypt” apologized for showcasing a predominantly white cast amid criticism over lack of diversity in a film based on Egyptian mythology.

The mostly white cast came under scrutiny as soon as shooting started in 2014. “And so, the time-honored tradition of Hollywood whitewashing continues,” Australian writer Ruby Hamad wrote at the time.

There was new attention in November, when production company Lionsgate released the first look at the film in character posters and a trailer.

Actress Bette Midler was among those to call out the filmmakers for casting white men in a film based on Egyptian mythology.

“Egyptians, in history and today, have NEVER been white. BRING BACK GEOGRAPHY!! It’s Africa!” she said in a tweet.

“Dear Hollywood, Egypt is in Africa. Northern to be exact. Why is that so hard to grasp? Stop gentrifying African countries,” former NFL player turned filmmaker Matthew A. Cherry said.

In a statement first reported by Forbes on Friday, director Alex Proyas acknowledged the controversy.

“The process of casting a movie has many complicated variables, but it is clear that our casting choices should have been more diverse. I sincerely apologize to those who are offended by the decisions we made,” said Proyas, whose director credits include “Dark City” and “I, Robot.”

Lionsgate also weighed in on the uproar.

“We recognize that it is our responsibility to help ensure that casting decisions reflect the diversity and culture of the time periods portrayed. In this instance we failed to live up to our own standards of sensitivity and diversity, for which we sincerely apologize,” the company said in a statement. “Lionsgate is deeply committed to making films that reflect the diversity of our audiences. We have, can and will continue to do better.”

Hollywood has a long history of casting actors of European descent to play characters of different races. Even Butler has played a role beyond his ethnic roots, starring as King Leonidas in “300,” a character based upon the real-life king of Sparta.

Thanks in part to social media, critics of “whitewashing” have been able to make their grievances known in large numbers in real time. Director Cameron Crowe came under fire for casting Emma Stone as a Hawaiian woman who is one-quarter Chinese in “Aloha,” prompting him to apologize. Filmgoers also criticized the choice of white actress Rooney Mara to play the Native American Tiger Lily in “Pan,” this year’s live-action retelling of Peter Pan.

The apology from Proyas and Lionsgate might be too little, too late, Mendelson said.

“With the caveat that ‘It’s my film and I can do what I want!’ is a perfectly understandable defense and with the understanding that admitting error on an already in-production film doesn’t undo the original subject of discontent, it’s a little refreshing to see the respective parties just offer a mea culpa,” he wrote.

However, if the film turns out to be a hit, “it will be used as evidence that you can get away with this kind of thing and that you shouldn’t take the ‘risk’ of crafting a movie such as this one with ethnically-accurate casts,” he said.

Related Topics:Gods of Egypt
Up Next

Bradley Cooper’s “Burnt” A Miss, But Not For Lack Of Effort