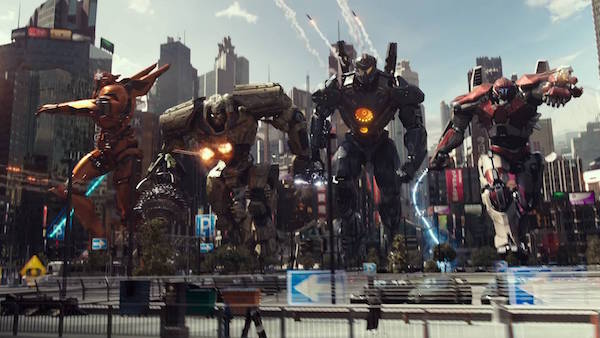 After six weeks at the box office, Marvel’s Black Panther has finally been taken down from the #1 slot. It was Pacific Rim Uprising, the sequel to the 2013 giant robot action picture, that was finally able to dethrone the king. For its debut weekend, Uprising brought in $28 million domestic. That’s not a stellar opening for a big-budget action picture of giant robots and giant monsters, but enough to kick down Black Panther to the #2 slot, earning $16.6 million for the weekend. Still, it should be worth noting that Black Panther’s domestic box office is now sitting at $630.9 million, making it Marvel Studio’s most successful superhero film by a margin that could grow wider considering it’s just now descending in the box office.

There was a slew of new releases for the weekend that are all over the map. Sherlock Gnomes, the animated sequel to Gnomeo and Juliet, debuted with a $10.6 million gross, placing it in the #4 spot. Sony’s religious epic Paul, Apostle of Christ had a small opening of $5 million domestic, but the budget for the film, oddly enough, was $5 million, making its #8 placement not as discouraging. The romantic drama Midnight Sun also had a small opening of $4.1 million to be placed in the #10 spot. But perhaps the weakest debut for the weekend was Steven Soderbergh’s psychological drama Unsane, debuting at #11 with a $3.8 million gross.

There was also a heaping dose of massive drops from previous films. The new Tomb Raider starring Alicia Vikander took the biggest tumble of a 55% drop, falling from #2 to #5 after two weekends. A Wrinkle in Time, Ava Duvernay’s big-budget take on the classic novel, suffered a 50% drop to descend from #4 to #6. And while Game Night has proven to have legs to stick around in the box office, Peter Rabbit took a 51% fall to be pushed out of the top 10, an odd dip considering Easter is right around the corner.

The films that are proving to have legs is the Christian drama I Can Only Imagine, dipping only 19%, and the teen romance Love, Simon, dipping 33%.

This week will be an odd one with Steven Spielberg’s virtual reality adventure Ready Player One will be debuting mid-week, which could offset how much it will make for the weekend. Debuting that Friday will be two films with devoted audiences: the Christian drama God’s Not Dead 3 and the black thriller Tyler Perry’s Acrimony. Based on the theater count, it’s clear that Ready Player One will be the big winner.

Review: Rampage is a Monster Mash Most Mild